The mission of the association is to maintain strong bonds among the college, the students, and the alumni and to create a platform to keep the alumni engaged with their alma mater to shape the future development of both. 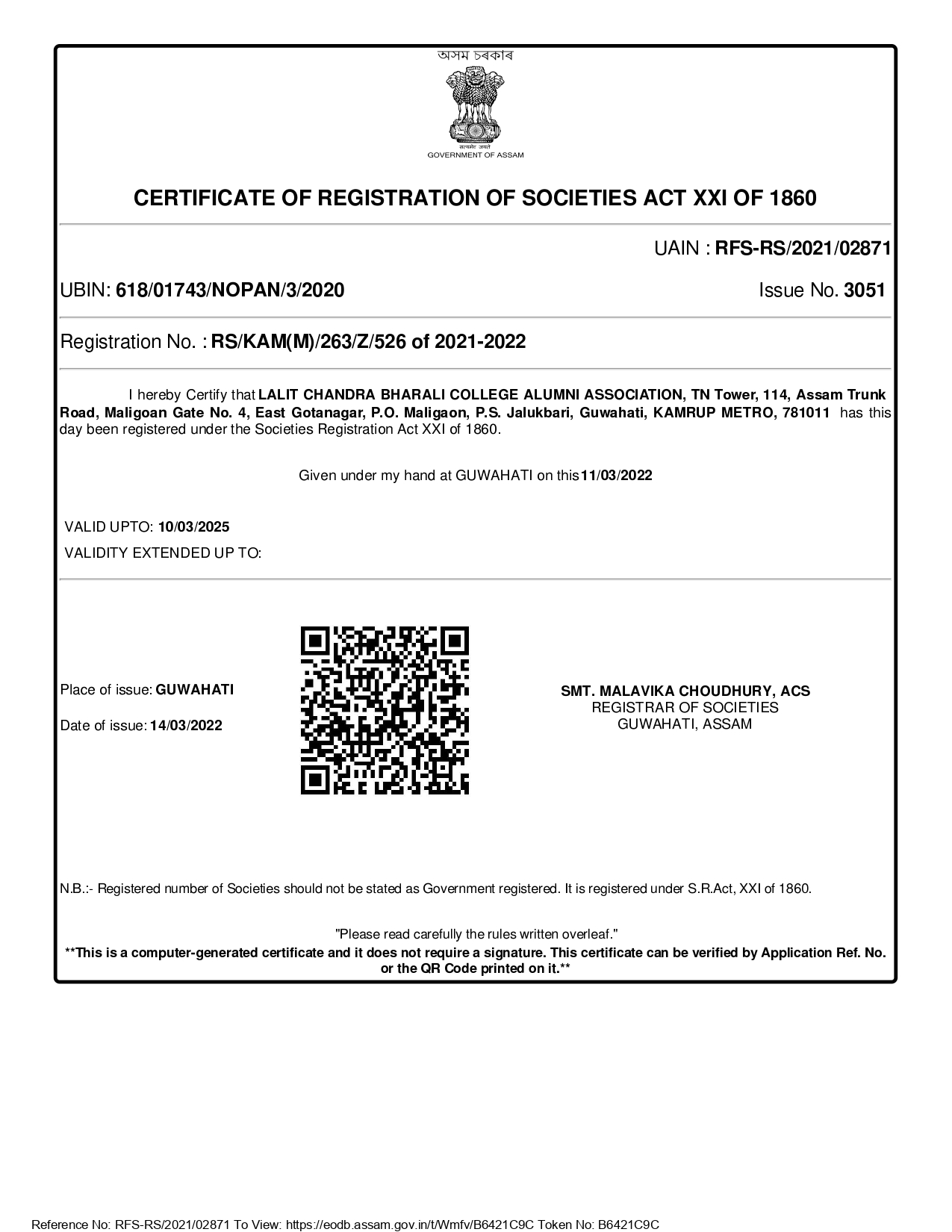 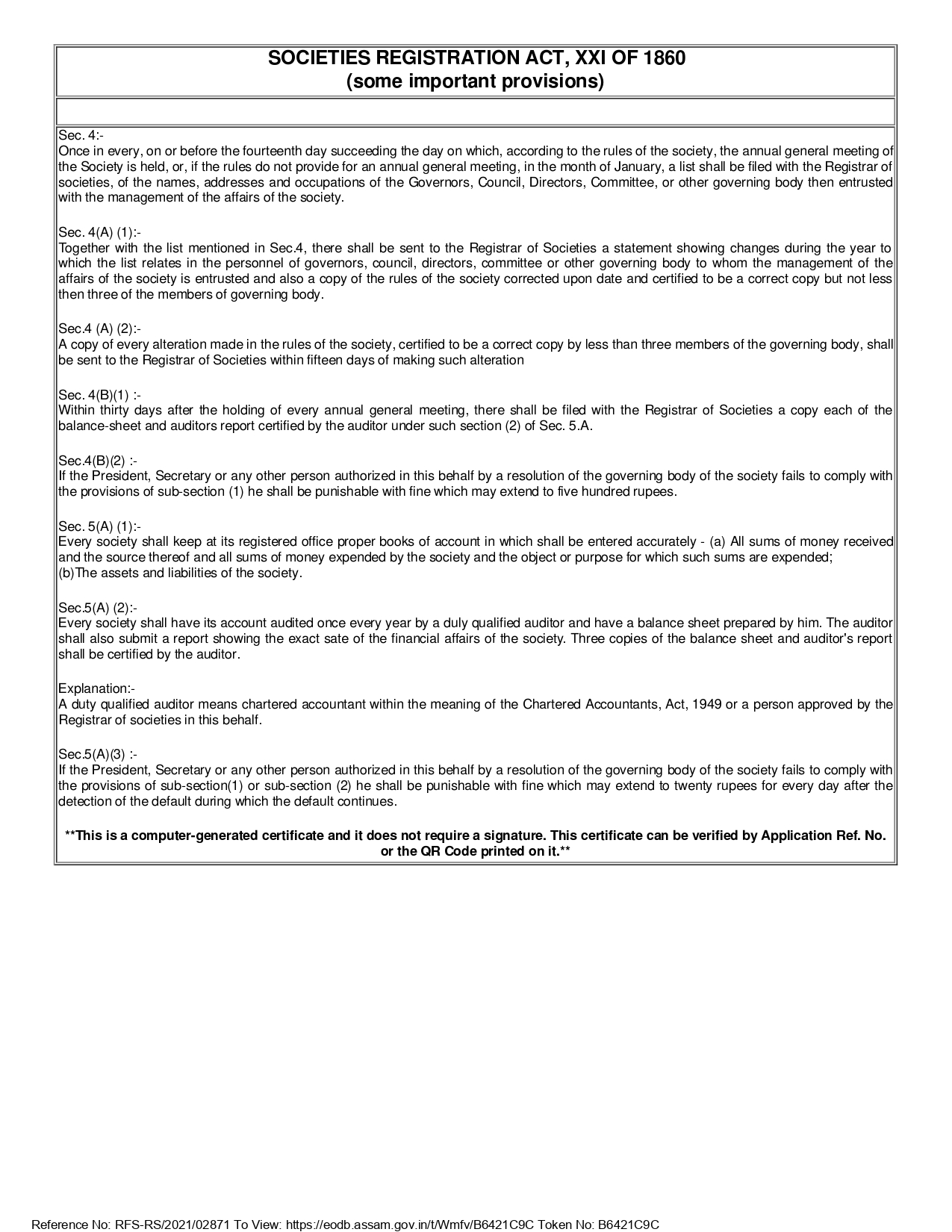 2. ADRESS OF THE MAIN OFFICE OF THIS SOCIETY: - The head office of the Society will be situated at:
TN Tower, 114, Assam Trunk Rd, Maligaon Gate No.4, East Gota Nagar, Maligaon, Guwahati, Assam – 781011.
The society may have branch office at any other place within its jurisdictional area.

3. AREA OF OPERATION: - The Society will have its operation in all the districts of Assam.

4. AIMS & OBJECTIVE OF THE SOCIETY: The objects of the Society is different as given below: -
4.1 To encourage the Alumni to take active interest in the progress and development of the Alma Mater (LCB College).
4.2 To promote close relations and foster mutually beneficial interactions between the college and its alumni.
4.3. To arrange symposiums, workshops, conferences and invited talks by eminent persons from various disciplines to uplift the knowledge of the current students.
4.4 To provide career counseling in various streams for those who are pursuing their study at the college.
4.5 To undertake activities of nation building including those of charitable nature.
4.6 To pursue other objectives consistent with the above aims and objectives of the association.

(c) SUBSCRIPTION, DONATION, ETC: -
5.1 The rates of subscription for life membership at the time of application shall be as follows:
i. Rs. 1000.00 for Alumni living in India
ii. Rs. 500.00 for passing out students
iii. USD 60 for NRI Alumni

(d) HONORARY MEMBER
The Association, in the General Body on the recommendation of the Executive Committee, may elect any person connected with the College, who is likely to promote the interests of the Association, as an Honorary Member.

(f) FINANCIAL POWERS OF THE SECRETARY
For non-budgeted items, the financial powers of the secretary shall be limited to Rs.15, 000.00 subject to the approval of President/Chairman.

(g) CONTROL OF FUND: -
A bank account will be opened in the name of the society in a Nationalized Bank or Post office, which shall be operated jointly by President and Secretary of the Society. The Finance Secretary will maintain the account of the cash and receipt expenditure and enter all receipts and expenditure into the Cash Book and obtain signature of the Secretary into Cash Book on daily transaction. The Cash Book shall have to be presented to the executive meeting in each sitting, or an up to date statement of expenditure in lieu of the same.

(h) DISTRIBUTION OF PROFIT, ETC: -
The profits generated by activities of the society are to be utilized solely for achieving the objects of the society.

6. ORGANIZATION OF THE ASSOCIATION
6.1 General Body: There shall be a General Body of the Association consisting of all members.
6.2 Executive Body: There shall be an Executive Committee to manage the affairs of the Association. The executive body will comprise of the following posts---
President 1
Vice Presidents 1
General Secretary 1
Asst. General Secretaries 2
Treasurer 1
Executive Secretary 1
Members 4

8. THE TERM OF THE EXECUTIVE BODY: -
The term of the Executive Committee will be 3 (three) years, subject to increase or decrease in due course if felt required.

9. PROCEDURE OF ELECTION
9.1 Vice President, Treasurer and members of the Executive Committee shall be elected in the Annual General Body Meeting or by means of an online election through simple majority of votes.
9.2 A notice of the General Body Meeting may be served on any member either personally or by sending it through ordinary post, or through newspaper advertisement or through electronic mode.
9.3 It shall be the duty of a member to keep the Association informed about his/her current address so that proceedings of the Association activities and meeting notice could be sent to him/her.

10. PROCEDURE OF RE-ELECTION OF THE MEMBERS OF THE EXECUTIVE BODY: -
If necessary, Re-election will be held according to the election procedure.

12. QUORUM
The presence in person or by representative of 15 members of the Association shall constitute a quorum for purposes of all meetings of the Council.

15. Audit of Accounts
The accounts of the Association shall be audited once a year by a Chartered Accountant or an equivalent Institute representative, to be appointed by the Executive Body.

16. Records of the Association
16.1 The following records shall be maintained by the Association:
i. Electronic Database of all the members along with their contact details.
ii. Minutes of the Executive Committee Meetings.
iii. Minutes of the General Body Meetings.
iv. Stock Register of non-consumable and consumable items.
v. Cash Book and Ledger.
vi. Receipts and vouchers.
vii. All publications, reports and souvenirs of the Association.
viii. All documents as required by law under Societies Regulation Act 1860.
ix. Any other relevant record.
16.2 These records shall include details of all sums of money received and the sources thereof, and all the sums of money spent and the purpose.
16.3 Every member of the General Body shall have the right of inspection of records of the Association during the office hours.
16.4 The weeding out of the archival records will be done in accordance with the rules of the Institute.

17. LEGAL PROCEDURE: -
According to the provision laid down in the section 6 of the societies Registration Act-XXI of 1980, the Society may sue or may be sued in the name of the President and Secretary of the Society.

18. REVOCABILITY: -
The Deed of Memorandum of Association or the Society is irrevocable.

19. INVESTMENTS: -
The Society if required will invest in the modes as specified under sub section 5 of section 11 of the Income Tax Act, 1961.

20. NEUTRALITY: -
The objects and activities of the Society is not for any particular caste, creed, community or religion.

21. INTIMATION TO AMENDMENTS: -
Any amendments and/or alteration to the rules without changing the basic structure of the society for which it is established will be intimated in due time to the Registrar of Society, Guwahati, Assam and the jurisdictional the Commissioner of Income Tax.

22. CHANGE OF RULES: -
Under any circumstances, even by a vote of absolute majority, the Executive Committeee or members as a whole will not have the right to alter or change the points as a mentioned under the head disbursement of profits, etc, dissolution and intimation to amendments at any given point of time. The rules made thereof are final and always binding on the members of the society.

23. WINDING UP OF ASSOCIATION
The winding up of the Association shall be carried out as per section 13 & 14 of the societies Regulation Act 21 of 1860.

Show your love for L. C. B. College with a donation


The alumni association of Lalit Chandra Bharali College is dedicated to serve for the alumni and the Alma matter through various activities such holding workshops, health camps, lecture series, connecting alumni etc. Your donation towards the association will allow us to conduct more such activities in future.